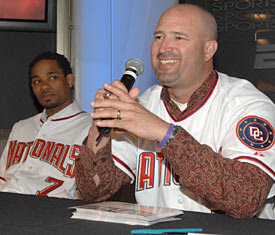 It's the first day of camp, WOOO! Oh, and nice shirt Manny

A break from the Preview...

In the Nationals Front Office's quest to sign as many has beens to Minor League contracts, a new name is added to the stable of Nationals All-Stars in the year 1999!
Tony Batista, of awkward batting stance fame, is now a Washington National.

What does this mean for the Nationals? Well, if Ryan Zimmerman either gets elected to President in the next year or implodes, it means little. IF, and that's a sizeable if, Batista breaks camp with the big team, he'll get minimal playing time because in is first full year, Zimmerman was fairly bulletproof.

But, as I'll say a lot during Spring Training, when you have one starting pitcher, nothing will surprise me.

Oh, and we also picked up a girlfriend beater. I would have preferred Daryl Ward over Dimitri. I mean....Ward is a beast!