AND THE GUZ SHALL RISE FROM THE ASHES 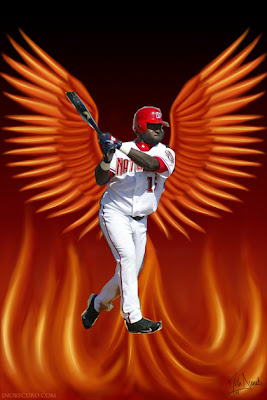 Return of the Refridgerator

I possess the skills of a soothsayer. I called for this move, not more than 3 days ago on BPG (I'm GUZMANIA2K7), lo and behold, it occured.

The King is back. This is fantastic news to me, because this guy is LIGHTS OUT against lefties.

As long as King is used as a LOOGY exclusively, he has a great deal of value to this team.

We can ship him out again at the deadline as we did last year when we got a Single A power bat. He's the new Mike Stanton.

So before today, almost ever Nats fan I know believed that Jim Bowden was headed to baseball's winter meetings to shake a few hands, share a few pints (and not drive afterwards), and to lowball every team in the bigs. And in true Bowden fashion, he has calmly cracked open a few dozen eggs and gently placed them on all of our faces.

Lastings Milledge is a National.

Here's the tale of the tape folks. In exchange for a player once described as "untouchable", the Nationals will be without the services of OF Ryan Church and C Brian Schneider.

I'm excited to see that we're not going to just sit on our hands this winter but this trade carries some large risks with it. That being said, it also had tremendous upside.

Here's how it could go wrong:

The Nationals start the season with essentially another starting rotation of relative unknowns. The staff is still extremely young and its another year of on-the-job training. This year though, instead of the guru Schneider mentoring the staff and calling the games, a young Jesus Flores will be behind the plate. Never having played a full season as a starting catcher in the bigs, Flores loses respect of the staff, becomes impatient at the plate (Schneider was no better at this), and ineffectively calls the games. All the offense in the world can't save bad pitching, unless you have ARod. The improvements shown by last year's staff are all but erased this year and the Nationals are yet again relegated to the rally cry of "Lets not be last!" in September.

Here's how it could go right:

The Nationals sign a veteran starter to anchor the staff and provide some leadership (Hello Livo!). Jesus Flores continues to call effective games and in turn gains the trust of the young pitchers we will no doubt have starting for us this year. He also continues to improve at the plate, while showing off that uncanny knack for the clutch hit. Lastings Milledge integrates seamlessly into the outfield alongside Willy Mo Pena and Austin Kearns (maybe, but more about that later), and the nationals now have 3 relatively young bats with pop in the OF. Sounds like something we can build around for sure!

One of the problems I foresee in this deal is that it does not practically fulfill one of our off-season goals, find a CF replacement for Nook Logan. Milledge has the tools but hasn't played there in a few years. I insinuated earlier that we could possibly see an OF of Pena, Milledge, and Kearns. So there are some options here. First off, there's nothing saying that Kearns will be back this season. Bowden loves his former Reds and to be honest I am a Power Kearns fan and believe we should retain his services. That said, he did have a pretty bad year at the plate and he could be gone. The option I prefer, however is to see Kearns shift to center, and we plug Lastings into right. Kearns has not exactly been known for his range but he's got a cannon for an arm. I think with a full pre-season of preparation to play CF, he could be a valuable asset there. Think an Alfonso Soriano redo.

At least we're not being idle

I'm here to tell you, this is unacceptable. I'd rather have Nook Logan start until a kid is ready. In no way do I think Corey Patterson is worth more the $20. Let's look at his stats, shall we?

Basically, this guy has no business on a major league roster. In fact, looking at his numbers, I don't know how this guy has gotten two contracts. Didn't GMs learn anything about fast not being the most important thing when they used to get sprinters to be pinch runners, and they sucked? Guess not.

Please Stan and Co. Anybody but Corey Patterson. Anybody. Look at David Dejesus. Mike Cameron. Rocco Baldelli. Carl Crawford (I can dream).

WHOA. Just saw something...Patterson is a Boras client. Did we need anymore reasons not to stay away from this joker?

DOUBLE WHOA. Didn't see this before...

In other news, the Nationals need help off the bench, and infielder Aaron Boone could be a great fit. However, Nats assistant general manager and Boone's father, Bob Boone, said his son may want to look at a place where he would start the season as a utility player and then start playing on a regular basis, which happened with the Marlins last year.

Boone played in 69 games for Florida and hit .286 with five home runs and 28 RBIs. He was playing on a regular basis at first base before a left knee injury in late June put him out for the rest of the season. Boone's father said the infielder's knee is 100 percent healthy.

"I think he would really help our club with his ability to play all the infield positions," the elder Boone said. "When you go and build your bench, you want to have people where [you don't have much of a fall-off]. When you look at it that way, Aaron fits the bill. There are so many things we have to put together [in other areas of the team] before that would happen."

GET THIS MAN A CONTRACT. If only for the positive karma, and the anti-Red Sox juju.

What's in a name

Winter meetings are about to start which means its once again time for Jim Bowden to get beat up in the media over his wheeling and dealing tactics. But this is not what this post is going to be about. That I reserve for another time...if I feel like it.

No, this post is about the new stadium. Since I'm too poor and live too far away from season tickets, I've got no gripes about ticket locations or prices or anything of that sort. What I really wanna know is what our new home is going to be called. Right now we're still stuck with boring old Nationals Park. Now my vision isn't so clouded as to think that the Lerner's have enough money not to sell the park's naming rights, therefore naming it after some historic figure of Washington baseball/political history. (Johnson Park anyone? Perhaps Banneker Field) But I sincerely hope they think of the fans even the slightest when they make their decision as to who to sell the park to. To demonstrate my point, I've complied the list of what I think may be the 5 worst names for professional sports stadiums. I'm also included offers that teams received for naming rights.

I'm not going to even discuss the first one. Parents, if your kids ask, tell them its a fast food chain; that's it, that's all. Second on our list looks innocuous at first...until you realize that its not on the campus of UoP, but is the stadium of the Arizona Cardinals professional football franchise, thus creating mass confusion for us all. As for the third spot on this list, I know its juvenile and stupid to laugh at the name Gaylord, but you were thinking it too. Number 4, thank you for reminding us that you're in Anaheim and not LA but that you want to be from LA but not lose your roots in Anaheim...of Anaheim. Last but not least, I'm not sure what Jobing is, but I'm pretty sure its illegal in at least 5 states.

So c'mon Ted, don't let me down. Let me walk to the park with my dignity intact, which is much more than I can say for the residents of Phoenix.

If you have any ideas for what you think we should name the new park, send em in, we'd love to hear from you. Plus, we'll pass them on the owners, as soon as I tape the list to a brick and throw it threw Ted Lerners' window.

Off Topic: Colin Cowherd is a D-Bag

Thanks to the always well written, and almost always funny Sports Bog, I found this story.

Highlights:
Colin Cowherd claims Sean Taylor basically had it coming, because he used to be hood. Also, people can't change. And he's omniscient. Oh, and he's blatantly ignorant on race issues. Some quotes...

Sean Taylor, great player has a history of really really bad judgment, really really bad judgment. Cops, assault, spitting, DUI. I'm supposed to believe his judgment got significantly better in two years, from horrible to fantastic? 'But Colin he cleaned up his act.' Well yeah, just because you clean the rug doesn't mean you got everything out. Sometimes you've got stains, stuff so deep it never ever leaves.

I didn't grow up African American. I grew up middle class. I wanted Stephen A.'s perspective on the story. And during this story I leaned on Stephen A., Michael Wilbon and Jason Whitlock for a perspective I don't have. You walk around ESPN, it's in the halls, on the posters, Diversity, Capital D, big letter. You know why Diversity's really important at ESPN, a big company? Because it gives you more people with unique perspectives. And if you're a growing company, you want to stay fresh, you need to have a 23-year old Hispanic gal or guy tell us what's going on in your community. Asian, white, black, Hispanic, everybody, new voices, young voices, old voices. You walk the halls of ESPN, it's the United Nations. It's great. Canadians, Hispanics, Europeans. They give us a perspective we don't have.

I didn't grow up black, I grew up (tax bracket). Get it? It's racist madlibs.

What a putz. I always disliked him, but now he goes in the pantheon of Assaholic ESPN personalities, joining Jim Rome and Orestes Destrada. What you say? Orestes never did anything to nobody? Well, I don't like his first name, and his suits are ugly. SO he goes on the list.

I know it's been a while since we've been regularly updating, and we have our share of excuses. Lack of exciting news, for one. But, others manged to keep the embers burning. So, we won't use that excuse.

The purpose of this entry is to tell the people still reading this blog what we plan to do to make this blog more "necessary".
-Mondays will be for Weekend recaps, and looking at our current roster.
-Tuesdays will be looking at Nats Prospects.
-Wednesdays will be focused on our Divisional rivals.
-Thursdays will be a blog roundup.
-And Fridays will be a weekly recap and whatever else we feel like putting in there. Other than that, we'll post on a weekend if something exciting happens, other than that, this space will be quiet on weekends. Feel free to come and comment (yeah right), and we might have some other plans to make it worth coming to the page. Stay posted for that.

The weekly schedule will start next week, coinciding nicely with Winter Meetings. Come back then for a new, revamped Nats Report.

Doing the work that we won't...