Went to the game again at Turner...

This game has it all. Z-man pulling a Nook, a Flop 3 pitch all looking strikeout, and a multi homerun game by a guy with 4 HR all year coming in. I'm not going tomorrow. I can't stand how much we blow.

And its all because GUZMANIA is dead...he was more important that you all realize.

That's what the Nats and I share in common this week. I'm on the road for business as are they. And we just both happen to be in the ATL. So how better to spend a balmy summer night then at a real major league ballpark, Turner Field, watching the Nats take on the cowards, errr Braves. I will have all of you that watched know that somehow we didn't look as bad in person as I'm sure we looked on TV. I didn't even notice the 13K's, well except for Zimmerman's. Dude looks as lost as a congressman in his constituency. Highlights of the game were that Bergmann looked just as good as he did before he went on the DL. I attribute the fall off in the 4th inning as him just getting tired. It's only his first start back, so look for him to go longer and longer into games as he keeps going. But what I saw looked promising. The hitting also wasn't as bad as I had feared when I heard the Guzman news (more on that later). We just couldn't string them together. With Tim Hudson behind us now, I think we have a good chance to come back in this series and win it.

On the the Guzman news. As most of you know GUZMANIA 2K7 is now over. He had surgery to repair the cartilage in his thumb. What sucks about the whole thing is that it was on such an innocuous play. Barfield looked much more shooken up by that play than Guzman. Then again three weeks ago in my slow pitch softball league a slid into 2nd and torqued the wrist, played the rest of the game and the next day couldn't move my hand, so I can see how it happened. I'll tell you why I'm not as depressed as you'd think I'd be. Had Guzman continued playing, there was a good likelihood that he would be dealt before the deadline to a contender. Now that he's "damaged goods" he'll be around next year, when we're supposed to have a marginally better roster. So the GUZMANIA 2K8 train is now being assembled. Tickets go on sale next spring! Those of you who bought season tickets to 2K7, thanks for Pledging your allegiance, you've got preferred status for next years GUZMANIA!

BTW after watching a game at Turner, I don't care how much more expensive tickets are at the new field...it'll be worth it. Also I'd like to take a moment to thank the Braves for making the game a good experience for the visiting fan. Before the game, on the giant video board, they ran a 5 minute promo on the Nationals and their history in Montreal. And repeatedly throughout the night many of the trivia questions were actually Nationals related, such as how much the Nats new ballpark cost, and who threw out the first ceremonial first pitch ever at RFK. Perhaps I'll go back tomorrow and sit in the $1 skyline section, as opposed to my no closer to the field $8 seat.

There are no words.

Nook, I'm finished with you.

CLEVELAND GETS STEAMED BY CHIEF

Chief is strikeout nasty right now, and so was Rauch. A display of Bullpen mastery by the Nationals, along with a strong performance by Micah Bowie.
We were talking about Bowie's ability to continue to avoid L's, and it's a smoke and mirrors scenario. He has little control of his curve, but he has multiple pitches. And he's tricky.
And Kyle has a new favorite player, double 00, B Watson.

Last night....well, we aren't going to talk about that. That was an example of good vs. not very good. Let's talk about other stuff.

Levale, we hardly knew ye. But, hope you weren't settled in DC. Speighner along with Abreau were DFA'd today, making room for Luis Ayala (YES!) and Chris Schroeder (who?). Also, Brandon Watson has arrived, proof that the Nook/Langerhans combo isn't working. Nook needs to go.

My next pick to leave, Tony Batista. Bergmann to come up. We'll see how genius I am.

Because a million brooms couldn't clean up Baltimore 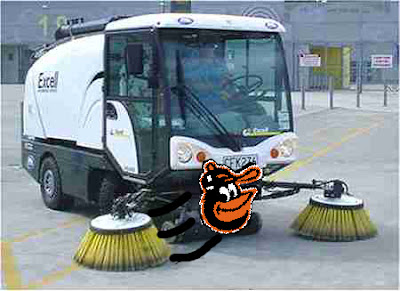 Lock it up, take it to the bank

Just want to let this out, so you can pay us homage later. Keep D-Meat, ship Nick Johnson. There we said it, what're you gonna do about it!

Word on the street, from a million different sources, including the Nats home page, Nats Journal, Rotoworld, Fox, etc., etc., say we will be going after the one, and only, Elijah Dukes.
No one disputes the Dukes has pop in his bat, something we want in a CF next year. You know who else has pop in his bat? Jose Canseco. He's still in independent ball somewhere, throwing the knuckler. Let's give him a contract! It's not like he hasn't confessed to doing anything wrong, and written books about it!
The consensus is that the Rays are trying to get rid of Dukes ASAP, as he has just fathered his fifth child out of wedlock by a 17 year old foster child. At this point, the Rays might be asking for a bucket of baseball and some bats. If this is the case, I say we take him, and stick him in Columbus, as we have no youngsters of real worth there, and he can't screw up a last place team. BUT, if they ask for a young player like Flores, or on of our good arms out of the the pen (READ: COLOME. They want him back, maybe? probably not. But I want him), then I say, NO! with a fake French accent.
Flores WILL be the man. Mark my words. Just as we predicted the rise of GUZMANIA2K7, we are predicting that Flores will be an All-Star in 4 years. Write it down.
So in summary, No to Elijah Dukes, unless he's almost free. If free, then yes.
I doubt he will be free, and I would keep him away from DC, as there are enough crimes there without importing criminals, so I doubt we'll have him.

Perhaps its true. We just might be on a roll. Yeah I know we're playing just over .500 ball as of late, but for a starting rotation of Simontacchi, Chico, Basick Speigner and Bowie. Just take a few minutes to stew about that for a second. At most any of one those guys is a 5th starter on contender and a 3-4 guy on a .500 team. Kudos to Mannyger for gettin the boys up. This brings me to my next point. As good as it is to have our team win games so far this season, its going to be that more disappointing when we become abhorribly bad after the trade deadline. As much as I'd like to be able to see some wins to close out the season, I'd much rather see us trade away the valuable commodities we have for some young talent. Now I'm not saying that we should start over with a new team next year, expanding "The Plan". Rather we separate the chaff from the wheat, leaving only the players that can help us for the long haul. So here are the players I would say will be up on the block this summer:

Ronnie Belliard
Dimitri Young (Love this guy, but he's getting old and he needs to go to the AL so he can DH)
Ray King
Chad Cordero
Jon Rauch
Cristian Guzman (Maybe, but I hope not. Guzmania lives!)

As for tonights game, we brought out the whoopin' sticks tonight. And with the exception of Fick and Colome, everyone manned up tonight. I was gonna say that chicks dig the long ball, but no one wants the women baltimore has to offer soooooo yeah, not goin' there. Anyways the nats go for the series win tomorrow. It's in the bag.

Ladies and Gentlemen,
As we have stated from the start, GUZMANIA2K7 is a force to be reckoned with, and deserves an all star berth. Don't believe me? Ask Ladson.

If you read this blog, we demand you cast your vote for GUZMANIA 25 times, which is the maximum. Here is the link.

It's been awhile since I've had my say on here. But let me explain. I had no internet the entirety of last week after I moved across town. A weekend trip to Blacksburg and you've got the 10 days or so I've been gone. Enough about me though, what've the Nats been up to. You know, the unusual. Losing a series to the Pirates and then winning one against the Twinkies. This is edge of your seat stuff man, at least we're in almost every game. The pitching seems to have regressed a little bit as of late but that's to be expected with the arms we're rolling out there. The offense however has surprisingly stayed pretty good. We still have yet to blow anyone out but I don't care about blowouts. It's all about the W's baby! Tomorrow the Nats will bring a little class to the Baltimore era by gracing the Orioles with their presence. I'm just glad we don't have to face Bedard this series. Anyways I'm back, so get off me!

Kyle fell off the planet

Meat, you are a great hitter right now, but you don't not belong in the field. Your error in the 7th today is the stuff of little leagues. If the Nats bring this game within 1, I will make a Meat voodoo doll and stick a pin in your glove hand so you have to DH this entire week. Don't think I won't do it.

An Important day of Nationals-ness

Since Kyle is dead or something, and hasn't posted in a while, I'm going to cover today's important events. What important events might I be speaking of? That would be the 2007 First Year Draft, which the Nationals need more than most other teams. I'm also watching the Nats play the Pirates, and after giving up a lead off triple, Chico manned up, got two fly ball outs, backed up an errant throw by Kearns and prevented a run, and the K'd Jason bay looking. Nice start. I'll be popping back in as things happen.

Also, later today or tomorrow Kyle and I are going to post what we think the Nationals need to be a competitor in the NL East.

Update 1:23- Seriously, if we don't trade DYoung ASAP, we're idiots. The man is hitting out of his mind. It's too bad we don't get to use a DH, cause this man is built for it. He's just not built for anything involving a fielder's glove. 2-0 Nats off Meat's 2 run blast.

Update 2:46- We took Ross Detwiler, after Wieters was nabbed in the 5th slot. I'm not sure how I feel about this, but we'll see. Score still 2-2.

Batista runs through a stop sign and gets tagged out. Guzmania then follows with his patented triple. We lose by one, so you do the math.

So when I said you were witnessing history...

You weren't. Evidentally, Acta liked Speigner's "makeup" after his first inning, and he shall return to the rotation.

I'm watching this seaworld event at RFK, and we're down 3-0 after a Josh Bard homer. It was a popup, but in the normally hermetically sealed RFK, wind pushed it out. I can't expect anything out of Simontacci today, because I've pitched in the rain, and it sucks. Let's hope we can win this series, and enjoy the off day tomorrow.

You are witnessing National history...


At least I hope.