What can you say? I guess you can say a lot of things. 73 wins is 16 wins from 1st in the division. That's a lot of wins. 21% less wins in fact.
The Plan provides for developing young talent, not overpaying for FAs, and some other things that I can't really put my finger on. I do know this. For the Nationals to compete with the Mets and the Phillies in the next 2-3 years, a good portion of this team needs to go.
Schneider, Lopez, Belliard, Church, Kearns, Pena, and Logan wouldn't start on the Mets. And they shouldn't be starting for a 1st place team. They all have a few strengths, but they also have weaknesses that wouldn't be welcome on a World Series caliber team. From the reports I've read, almost all of our draftees are projected back end rotation guys. You can't win with four 5's. Let's hope for some magic, because to win a World Series, or hell, even to be in the playoffs, that's what it'll take.


THAT BEING SAID, I love the Nationals. I love how when they put together a little string, I lose all semblance of reasoning. Anyway, season's over. News will be posted, rumors will be posted, and we may expand the coverage of the site. Enjoy the winter everyone.

Ayala was on only because, when the Nationals called down to get closer Chad Cordero to warm up, Cordero rose -- and promptly threw up in his glove. Save the jokes about how that's what the Mets were doing all week. This was a serious situation.

"It was kind of weird," Acta said.

Cordero said he hadn't felt bad all day. But when he rose to warm up, he felt something. Some vomit escaped. "I grabbed my glove," he said, "and everything else came out." 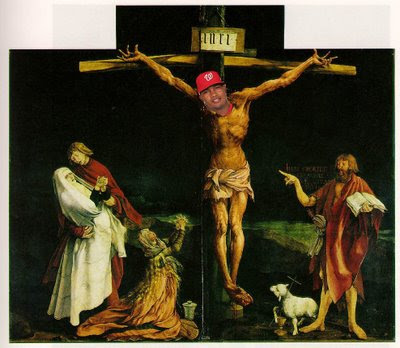 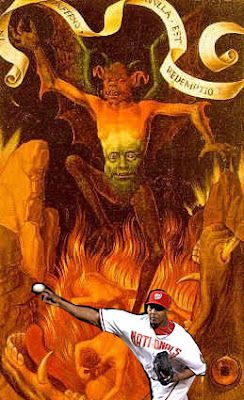 I'm here to say that moments last night were an embarrassment.

The pick off of FLOP after 5 throws over.
2 backwards k's with men on base on three pitches.

The good news, I don't believe we'll be in last place. The Yankees are 1.5 games out, and I'll be seeing them in person next Saturday, hopefully with playoff aspirations on the line.

We're toying with a redesign for the offseason, we'll see how that goes.

Anyway. Hope you can make it out to one of the last baseball games at RFK. I won't be, but were I hope, I would be.

Update: Bob Carpenter is out. I'm not torn up about it, but since I don't know who's next, I can't really say anything about it. We'll see what comes of this. I like Don Sutton, a lot. I like Charlie and Dave, a lot. I hate Don Baylor. I hate Ray Knight. I hate Johnny Holliday. Get me Vin Scully!

Return of the Crackers 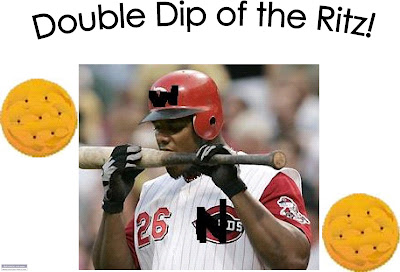 Hothead has a limo.

Courtesy of Nats320. Our favorite.

Here we are, September. The end of the line for 86% of teams, and the beginning of the long, cold, baseball-less winter. At 63 wins, we are hardly world beaters. We are expectation beaters, which is a lot better than perennial expectation shortcomings (see: Washington Redskins). There are a number of interesting stories to watch in the next month. Here are a few of them:

1. The Starting Pitching Conundrum- The current rotation of Shawn Hill, Jason Bergmann, Matt Chico, Joel Hanrahan, and Mike Bascik (with Redding out of commission for a week)
will not strike fear into the hearts of the NL East. It does have the makings of being formidable though. Shawn "When Healthy" Hill has shown some large bright spots, and with his devastating sinker and some strong innings in Fall League, I see him at the top of our rotation next year. There are issues of durability, but I tend to believe that's going to be the way for pitchers from now on. The 200ip pitcher is a rarity now.
Jason Bergmann has been inconsistant, with 2 or 3 gems (with one coming on his last start) surrounded by average or sub average starts. He has tools, but has control issues at times. Again, for what he is, and what he costs, a solid number 4, and a speculative 2-3.
Matt Chico, what can you say? Should he have been in the majors this year? No. He should have been in Harrisburg to start, Columbus near the end, and maybe with a callup. But, he was in the majors, and led the team in starts. Impressive, don't you think? More than any other pitcher on the staff, Chico struggles with control issues, and they have bitten him on many occasions. And with low 90s stuff, and no devastating out pitch (though his change has been responsible for a lot of his K's), he needs to have tighter control. But hey, Tom Glavine approves of him, so we should too.
Joel Hanrahan needs to have a big September to stay with in the rotation next year. He's another pitcher who has had a few nice starts, but has yet to show that he's a pitcher that a team trying to move the next level needs. I think he'll be a stop gap until a young pitcher makes his way up in the end of next season.
Mike Bascik is not good. Next.
Tim Redding

needs to get healthy in a hurry, and he may find himself back with the Nats due to an awful FA crop of pitchers. I hope he does, because I like his stuff. I think he'll be in AAA next year though. So we'll see.

2. The Middle Infield Conundrum- We at the Nats Report obviously love the Guz with a passion likely reserved for his wife and mother. We await his return, and count the days until he makes his appearance this month. That being said, do we know for sure that this year marks the return of Guz's offensive prowess? No, we're not positive. We hope so. Know why? Felipe Lopez is a crappy shortstop. He doesn't hit enough to warrant his D, and supposedly is having attitudinal issues. Ronnie Belliard continues to hit, albeit not at his previous levels this season, and has been reasonably solid at 2b. Should he lose weight so his range improves? Hell yes. Will he? No. Do we have ANY serious middle infield prospects that could help in the near future? No. So here's my prescription, Play Guz at SS all season, hope that he has a killer year, and trade him at the deadline if there's a market for him, since he's in his walk year. Hope that a middle infield prospect has made himself available, and if not, go after a big, young name on the market. Find a fielding first 2b, and platoon him with Ronnie. Oh, and non-tender FLop.

3. The Walking Wounded- Nick Johnson. John Patterson. Alex Escobar (haha. I know). These men have had the luxury of stealing money from the Nats this year. Some of them have net millions. Some less. What to do with these welchers? Nick could rebound this summer, and I hope he does, because he's an OBP machine. This displaces Meat, but that's a problem I don't mind having. JPatt is a head case, and should be cut and resigned to an incentive laden deal. That way when he has "nerve issues" again, we aren't throwing money at the problem. As much as I've said how much I love Escobar, this man is an injury magnet. I don't want him around the other guys...on second thought...maybe he'll steal everyone else's bad karma. He'll ward off injuries from NJ. ESCOBAR FOR BENCH COACH!

4. The Rookies- How soon will the golden children make their appearance? Despite Bowden's lip service, I see 2 or 3 rookies on the 25 man next year. Maxwell as a 4th outfielder. Detwiler as the 5th starter. Alaniz or Albalamadamadingdong in the pen. Write it down.

THIS JUST IN AS WELL

Jesus Flores > Brian Schneider, at least at the plate. I wish the bigs were like my softball where you could hit whoever you want despite who you have in the field. Man is clutch. I will doodoo in the fondue if he is sent back to the minors next year.

Ray King to the Brewers for a PTBNL. This is good, for a number of reasons, not the least of which is he is old, and was picked up for nothing. Unless we got back beans, this was a smart move.

GUZMANIA2K7 may NOT be over!!!

Also, Zimm loves his Sunday reds, as he wins another game.

Kyle might chime in with our thoughts on the Saturday night game we went to...needless to say, we were pissed about the results of the President's race. BOOO.